By Mike Richardson 10 years ago

I missed that buck last year.


I got to see this guy last week when checking my camera. I have named him the Vendetta buck. I set this junk tasco cam up in the area. I missed this deer last year. He looks as though he might have only gained 6 or 7 inches from last year. I think he was 3.5 last year and will be 4.5 this year. Seeing this buck in person 2 times is really killing me. I got a few pics of him so the flash isnt bugging him.

Seeing this buck duck my arrow forced me to sell my weatherby shotgun and buy a new bow. Ironicly i chose the PSE Vendetta and it fits because of the vendetta i have against this buck. This bow is oober fast, quiet, and smooth. A wise PA public land buck like this is unbelievably hard to kill. There were 13 guys on the first day of buck after this thing in like a half mile radius. I should have the woods to myself during archery and i am going to scout and set up another stand. When i missed this guy he had no idea was there. The wind was in my face and i spotted him walking the same direction as me about to cross a tram road. I was on the ground walking to my stand. I got to watch him make a scrape and rub. When he crossed the tram at 30 yards I watched my pin go from his head to his neck to his shoulder and i touched for the double lung shot. At the sound of my bow the deer dropped and his belly hit the ground and my arrow went right over him. The deer jumped back into the thicket and stood there then hopped off slowly. KILLER! I have been practicing for heart shots this year for this reason as well. I wonder how many times this guy has been missed by archery equipment in his life time

Last night before bed i was looking at this picture again. My wife says " You are going to drive me nuts about this stinking deer!" I thought to my self. You wait two months sister. LOL

140 is too high. My final answer is 132 gross. Let me know what you guys think
Login to comment 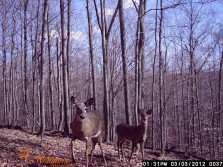 Fetch more gamecams
Back To Top